There’s a saying here in the Shasta Valley, that we have four seasons—Fall, Winter, Spring and Smoke. The last few days we are living up to that saying. On July 5th the Klamathon Fire broke out. Pushed by high temps and winds it rapidly consumed a major portion of the town of Hornbrook before breaking out into the surrounding wilderness areas. At one point the fire was about 11 miles away from us and the first night the ominous orange glow of flame lit clouds was easily spotted over the mountain to the north of us. In the last 3 days the CalFire crews have been able to get a line around the southern perimeter of the fire but new evacuations continue to the east and we are about 3.8 miles from the next evac perimeter.

Living in close proximity to a fire has a lot of impacts besides the constant worry—monitoring information channels, worry each time the wind direction shifts. We have 3 fire fighting helicopters bedded down at night in the fields to the north of us. Each evening the copters come back around 8 p.m. for their evening rest. In a way it is comforting to have them here, between us and the fire. At least we know that they would not be parked in harm’s way. A little before 9 they start lifting off for their day of water and retardant dumping.

The town has become the usual fire town, population swollen by the fire crews, trucks and service vehicles. Everywhere you go people shopping for supplies, or in the case of the evacuees, clothes, personal essentials, pet food.

The smoke has been on again, off again. This morning clear and cool enough I could open the windows and cool the house down, listen to bird song. But the air is tinged with the smell of smoke and it looms ominously on the northern horizon.

Hopefully in the next few days the fire crews can make good progress. Right now the fire is at 35,200  acres and only 30% contained. Fingers crossed that we have some good luck with the weather....

I was going to add some images but Google does not recognize my photo album....*sigh*
Posted by Jill at 8:58 AM No comments: 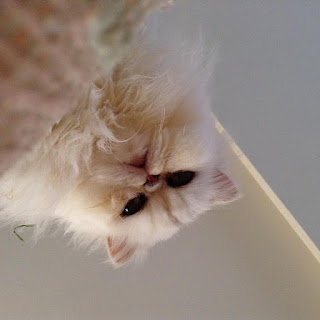 It has been almost three years since I did anything with this blog. I have to admit I got stuck in the tangley web that is Facebook. At first it seemed so easy. It was all fun and pretty colors and "Liking" stuff, getting "Friends". But the last few months have been a real drag. I've had to opt out of so many groups due to total overwhelm with people who seem to be only focused on info mining with no giving back, or arguing about politics, or why your statements are wrong, or, or, or...then I had Facebook going onto my iPhone photo stream and making cute little slide shows of my photos without my permission. Then increasing numbers of non-sensical ads and videos that would start up without some obvious way to shut them off. Then someone complained that I was using an alias on my Facebook page vs. my real name. That brought out the Facebook police who demanded that I either send them a copy of my driver's license or my passport to prove my identity or they would shut down my page as of January 26th. Well, you can guess how far that got (it's the Tom Petty influence here, I admit). It's just the final straw in a long slow death of the romance. I am still on Instagram which I love because it is so visual, and the captions promote brevity, and no depressing news headlines in your face every time you log on. A lot of my friends are on there as well, so I plan to carry on there. But I'm also going to try to get this blog back on track. I just feel it's a much more intimate way to communicate with people vs. Facebook.

Don't get me wrong, I'm going to miss having the communication with friends and family there and also the ability to easily share photos with my Mom. I'm going to miss all the cool links to recipes, weaving stuff, knitting stuff, and just general cool stuff that I've saved. But I feel like Facebook has been a long, slow suck on my spirit and soul. I feel depleted and overwhelmed by it. I find myself lately, scrolling, scrolling, scrolling through my feed trying to find something to catch my interest. I've decided that I have so much more to do with my life...hiking, yoga, reading, weaving, knitting, sketching, time with friends and family...I could, in fact, write an email to someone vs. just a quick blip and a "Like". I could be a lot more productive (although I have been accused of not sleeping). So I'm going to turn away from the whole FOMO mindset that seems to drive Facebook and just spend time nourishing my mind and my practices. It just seems like a good thing to do, and I'm kind of excited about it.
Posted by Jill at 9:39 PM No comments: 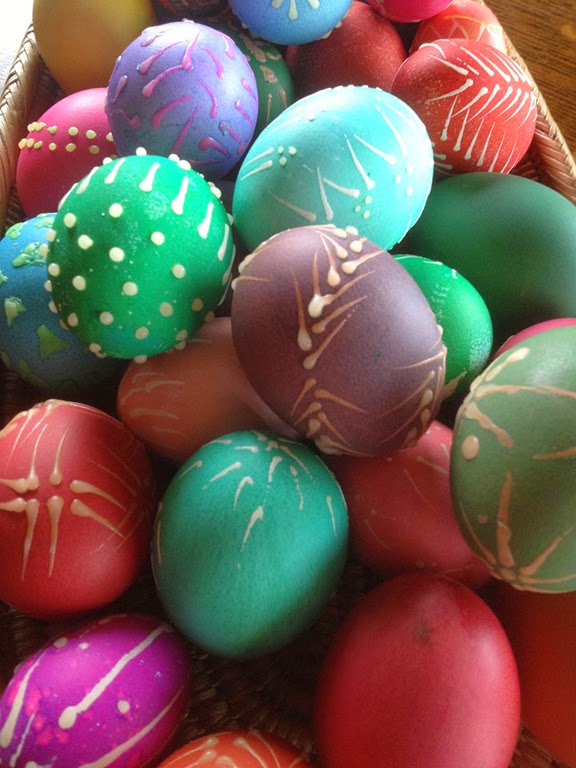 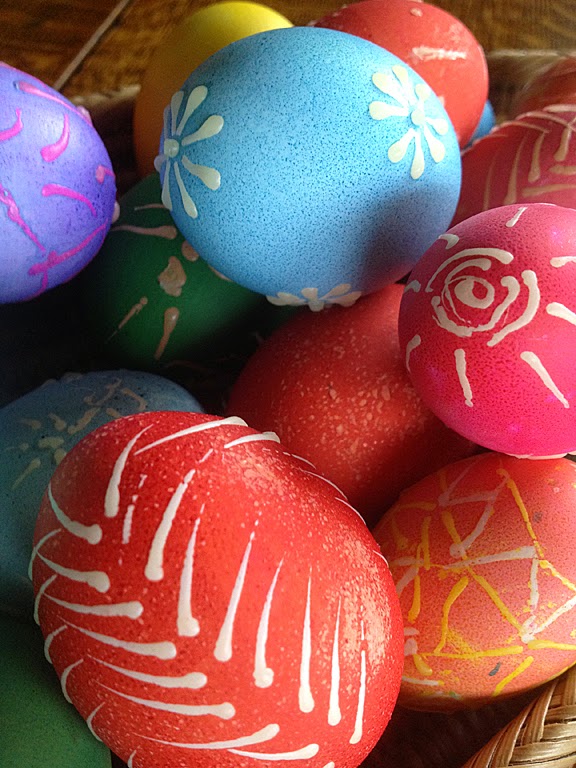 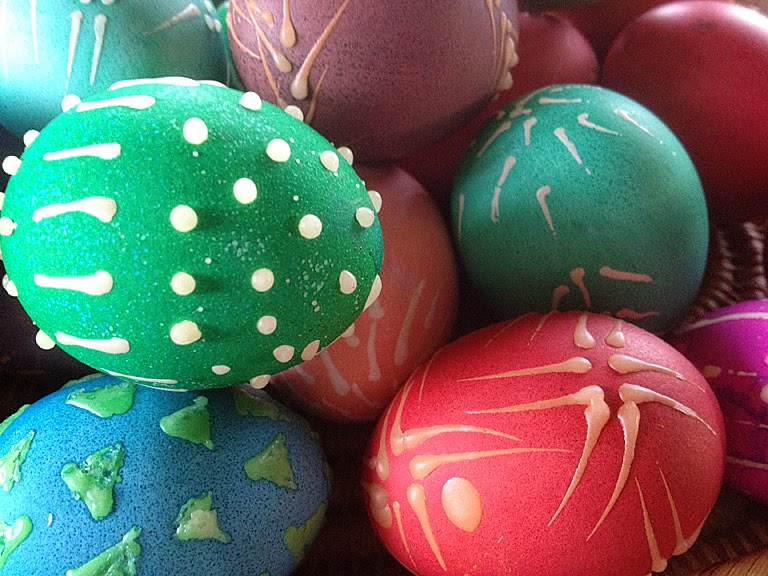 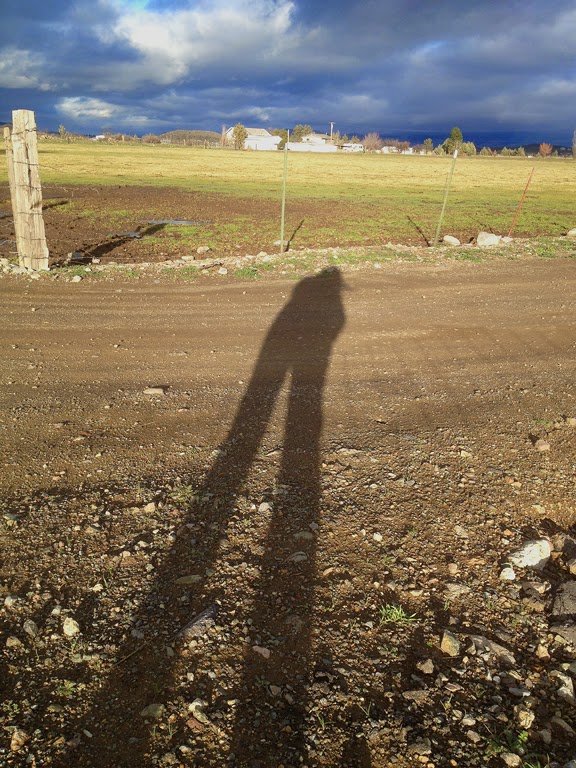 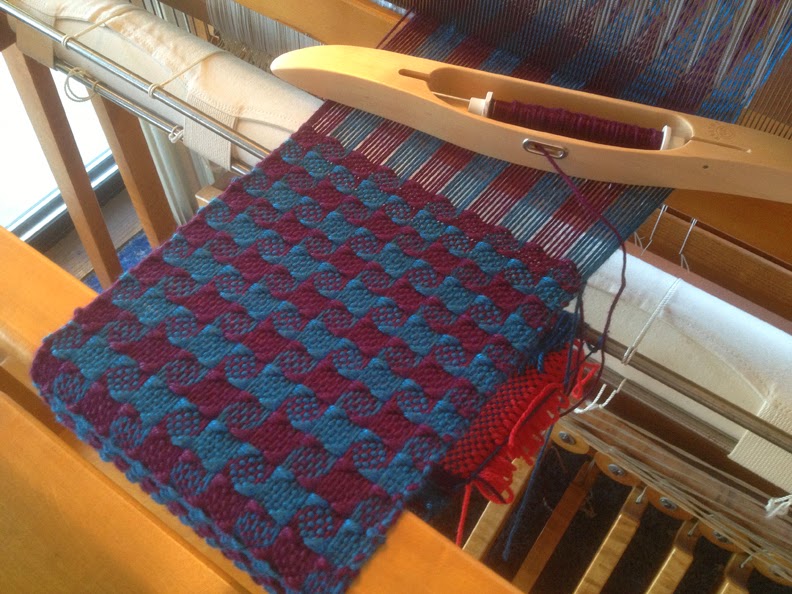 A few days ago I warped my loom with a quick project, this pinwheel twill scarf in a Bamboo/Silk blend yarn. This was another one of those situations that I had heard bad things about the warp yarn, that Bamboo breaks easily and sheds from the friction of the reed, but I decided to forge ahead anyway because I wanted to do a project that used 8 shafts. 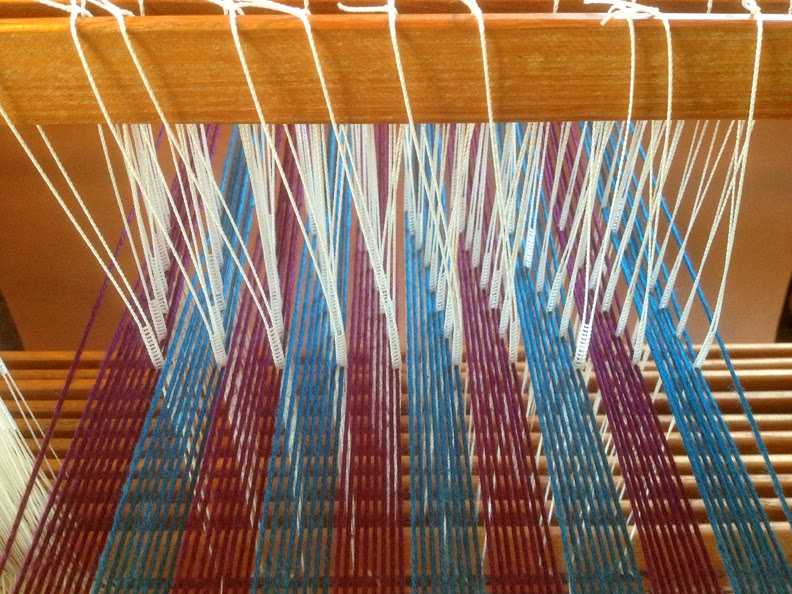 Thank goodness the threading and treadling are simple because I'm having a heck of time keeping the two shuttles straight and interlacing the second color threads along my floating selvedges. I'm ending up with lots of lumps and bumps on the right hand side. Also my sett seems a little loose even though I had wrapped the yarn on my sett gauge and it came up 9 epi and I went with 10 just to be sure. Now it looks like 12 might have been a bit better. I've had to really lighten up on my beater and the blocks are still not coming out square. Also this yarn is too slippery for the 4 warp floats and it bumps up distractingly. Also I think I could have gone with two colors that contrasted more and that would have helped some. But this is all a learning process. Next time I weave this pattern I'll also start threading on shaft #5 and end on #4 since that would put no warp floats on the selvedge and would eliminate some of those lumps and bumps you see there. Onward! 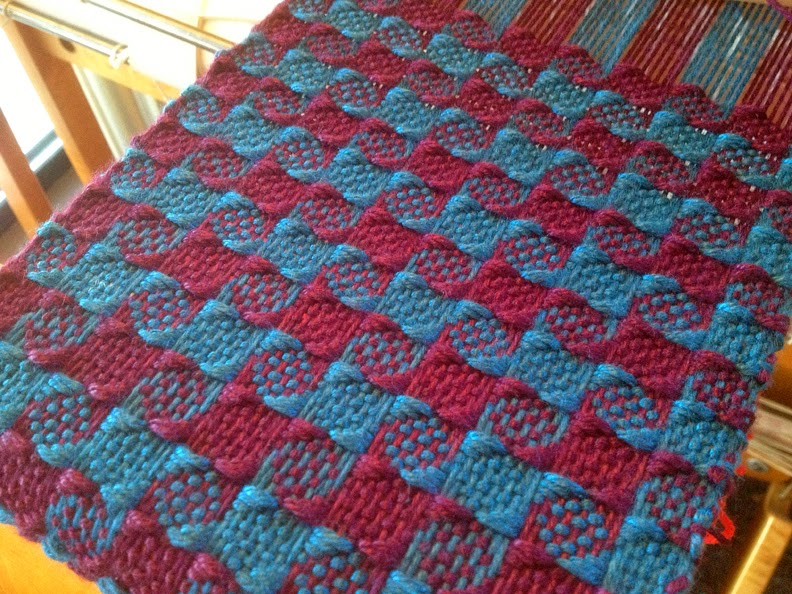 About two months ago I decided that I really wanted to learn to knit, but all I've wanted to do was make socks. Many people told me that socks were hard, and that I really had to have some experience with knitting to make them. So I've been busy making swatches of different kinds of stitches and playing around with yarns. I even make a rather large mobius cowl using seafoam stitch which came out pretty well. Anyway last week as I was lamenting my desire to make socks, a friend in my spinning group gave me some instructions from a class she used to teach on making socks. She also helped me select needles and yarn to make the socks. But most importantly, she offered to help if I got stuck. Well after a week of knitting like a crazy person (it has been at or above 100°F all this week--perfect knitting weather) I finished my first pair of socks and boy am I chuffed about them! Making the socks was a paradigm shift for me...so many things about knitting clicked into place with those socks. So expect to see more socks in these pages....another thing to do with my handspun yarn!
Posted by Jill at 9:05 AM No comments: 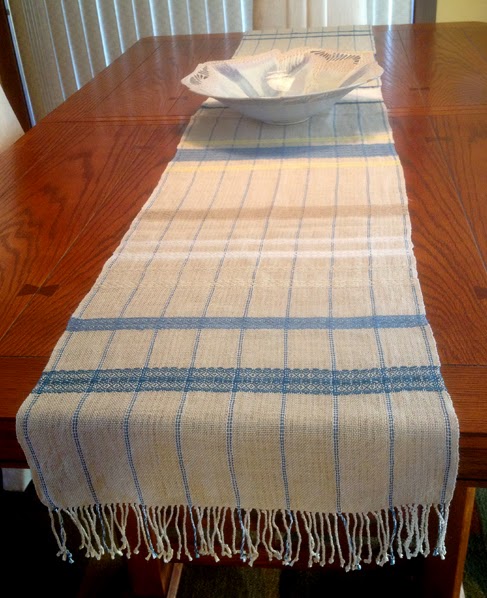 When I purchased my Ahrens loom, along with the usual loom parts, I was also given a large box containing about 50 cones of linen thread. The thread ranged in size from a sturdy 10/2 to hair fine 40/1. The colors were mostly unbleached, half bleached, teal, pink, yellow and blue. In the box were receipts and notes dated from 1945 with names and projects outlined for some of the different threads. I can only guess that this loom was originally owned by someone who was a production weaver.

After testing the yarn to confirm its strength, against all advice I decided to warp and weave a table runner in linen with some 10/2 white cotton for accents. I had heard all the advice about how linen is a nightmare to weave with, must be misted and kept damp, will snap in low humidity (which is us!). etc. etc. but I decided to fly in the face of convention and give it a try anyway. I figured I had 'free thread' and if things went south, well, then I'd know. 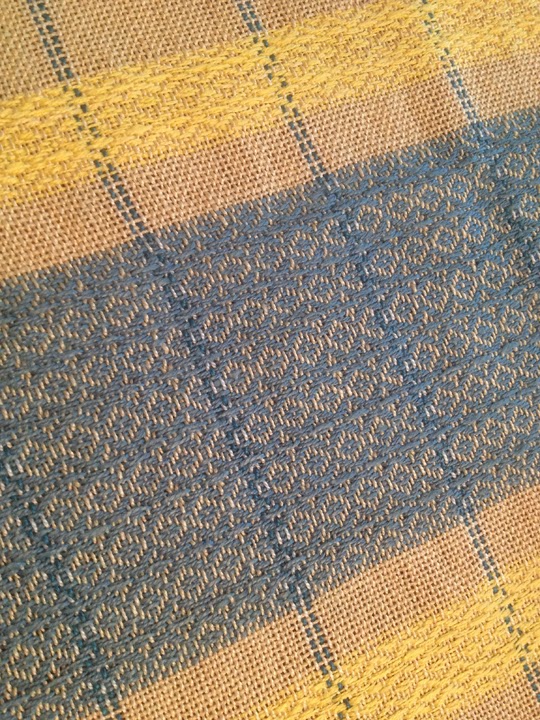 The half bleached linen had a kind of sizing on it that made it somewhat stiff and wiry, so I think that helped. The warping and weaving was straightforward and I only had one broken warp end when I got near to the end of the warp. I used a floating selvedge and my selvedges did not come out that straight since I decided combine both plainweave and a rosepath threading. Inspired by an old 1954 copy of Malin Selander's book Weaving Patterns from Sweden and by the work of Susan at Avalanche Looms, I set to weaving, throwing in bands of color in different treadlings of rosepath on the plain background. This was an amazingly fun project and I learned so much about my new loom, including the fact that it has much less loom waste that I had anticipated! 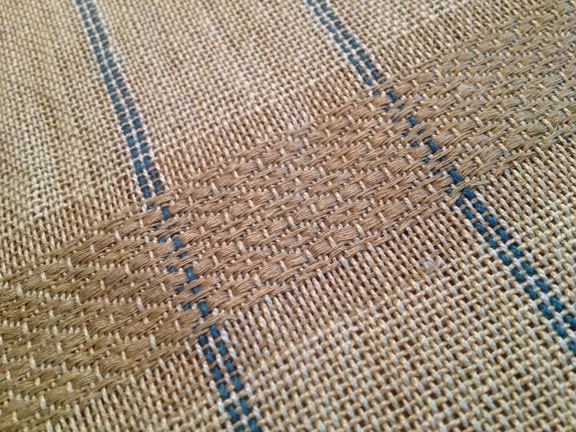 One of my favorite details is a band of the 40/1 unbleached linen which I used in a double bobbin boat shuttle. It adds a subtle accent and I'm now thinking that another project featuring just the two natural yarns together might be really neat. After twisting a few of the fringes on one end, I decided to save my hands and ordered a battery powered fringe twister which worked great! Washing and ironing the linen really softened it up, but I expect that it will get even better as time goes by. I'm really glad my first linen experience came out so well as I love it as a fiber. I'm even planning to try to spin some flax before summer is over. We'll see how it goes.... 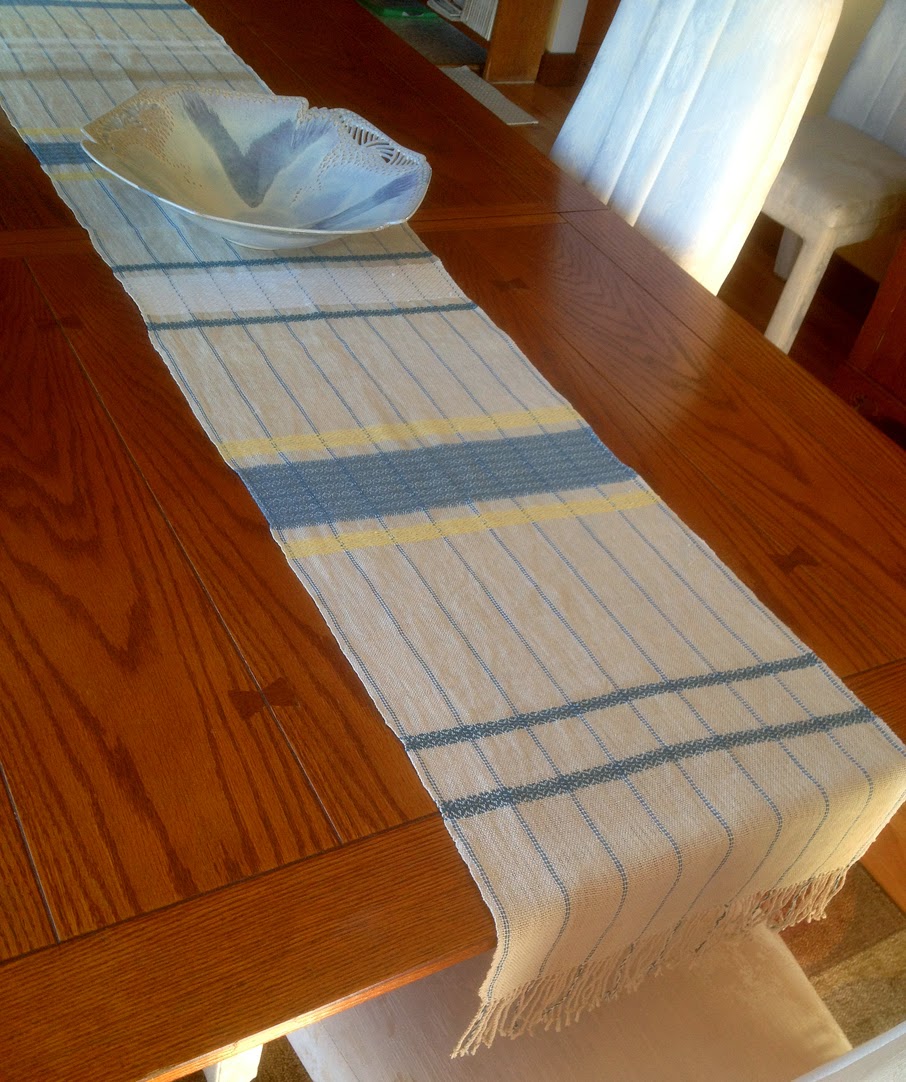 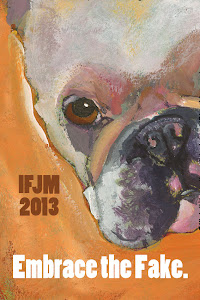